The Yakima Arts Commission, an advisory group appointed by the Yakima City Council, developed an idea to harness the creativity of Central Washington artists to invigorate windows of empty downtown storefronts by displaying their work as part of a project called, "Windows Alive!". "Windows Alive!" is part of an ongoing effort to bring public art in Downtown Yakima. Current window displays are located on Yakima Avenue between the Hotel Maison and Third Street.

Below is a sample of the artwork and statements from the five selected artists. 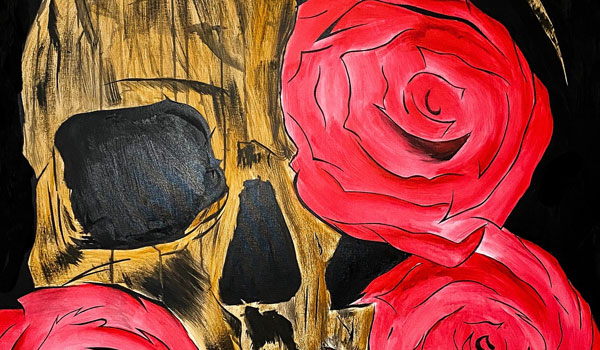 My work doesn’t have one specific theme. Which in itself makes it a unique experience viewing my pieces. The style diversity varies from pop, abstract, portrait and minimalism. A big component in my art is the common use of figures seen. Wearing different types of clothing representing the era’s and the characters’ personality I give them. A signature element in my art is the use of large size canvases. For this I believe these somewhat overwhelming pieces give the art a larger voice. What they all contain, is a presence of dominance occupying extended amounts of wall space. All of my pieces contain acrylic paint which for me is a personal favorite. Reason is, the opaque look it provides is a deep nature into the paintings. Oil and dry pastels and other mediums are used to add extra detail and texture to the work. Lastly, the art I’ve made has been featured in two local fashion shows named “One Love”. Showing not only is it created for art lovers, but also for people with a strong interest in the fashion world. 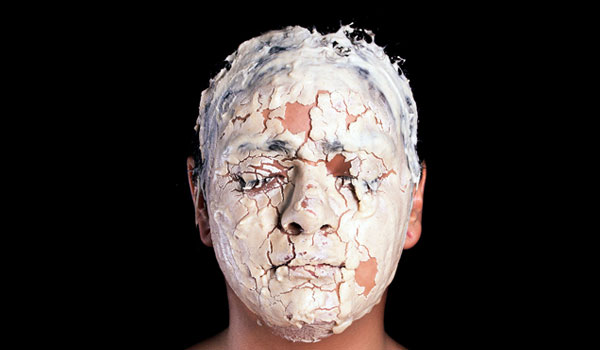 As a first generation Mexican/Guatemalan American woman living in the United States, I grew up with two different cultures. One that taught me to embrace and be proud of my heritage and the other that at times rejected that part of me and, in turn, made me to want to do the same.But through first hand experiences and witnessing many injustices toward myself, my family, and the Latinx community, throughout my life I have learned to lean on my heritage for strength and want to change the way we as a community are viewed. Witnessing my sister being yelled out by a fellow student to go back to Mexico when she is a natural born U.S. citizen, being slapped in the face for speaking Spanish by someone who I thought was my friend, being treated as a lesser intellectual because of the color of my skin, my father being prohibited to speak Spanish in the workplace because someone did not like it, and hearing stories of families who have lived in the U.S. for many years be torn apart and abandoned by the system have been the fuel behind the inspiration of my work. These occurrences have made me want to fight an bring awareness to the racism and oppression the Latinx community to encounter. I know I am not the only one who has lived and is living through unjust treatment embedded within our society and I feel their needs to be greater awareness and understanding of these issues.

Through digital photography, and analog processes I create works that convey the struggle, pain and hardship I and others like me that have encountered, while simultaneously celebrating Latinx heritage.

The use of family photos, religious iconography, physical pain and cultural practices in my work are derived from my heritage and personal experiences and at times used as metaphorical expression. The masa or tortilla dough in particular is used as a representation of humanity. The inspiration for its use comes from the ancient Mayan belief that the gods created the first humans from the masa.

My intention is to have thought provoking work that challenges those who neglect to acknowledge the dehumanization and degradation of the Latinx community in the U.S., and show a proud and rich heritage. With these works I also hope that those with similar experiences and heritage know they are humans, deserved to have their voices heard and should be proud to be who they are. 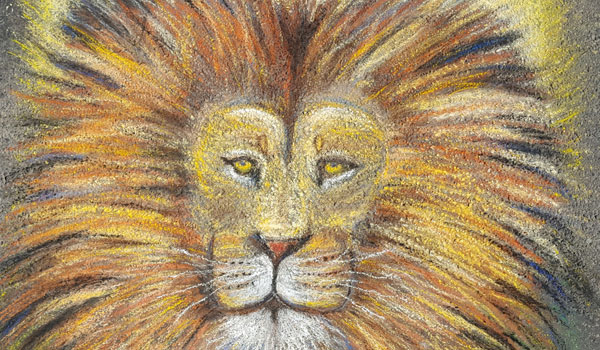 Street painting has been an interest and passion since I was asked to be a judge at the inaugural Bellingham Chalk Art Festival years ago. While jurying that show, I thought, why don’t I give this a try? The following year I did a sketch and was hooked. Since then I have drawn for a number of street art festivals in the region. Drawing on asphalt and cement presents many challenges. A four-foot by four-foot (or larger) square on a street will consist of course asphalt next to grooves smoothed down by tires. There may be a wad of gum or a crack. This is your canvas. As a street artist you prepare the surfaces you get and adapt to those things you can’t change. Then there are the elements of wind, sun, shade and rain. Plus bending over and crawling around on the street is tiring on the body. By the end of the day your hands are worn raw with the grit of the street. Caked with every color of chalk, your fingers look like gangrene appendages that should be amputated.

But you persevere and create a piece of art. One of the best rewards is interacting with the people on the street, to hear their comments, answer their questions and appreciate their encouragement.

The hardest fact to accept is that your work is temporary. You spend hours laboring over a drawing that will be gone in a day or two, washed or blown away, trampled by feet, cars and bikes. That’s the fate of all street art. So, after collecting a few digital images, I just walk away to draw another day. 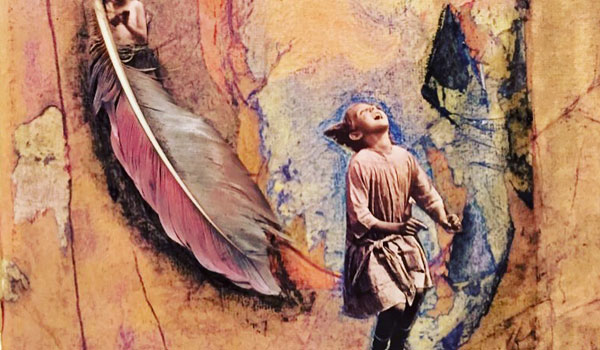 I still consider myself an emerging artist. I am learning, growing and exploring in several mediums. I work with pastel, collage, assemblage and mixed media. I enjoy repurposing materials. I will sometimes use natural elements in my collages. For example, tree bark, feathers, rocks, shells and even a broken bird’s egg. I will start with an idea and then let it go in any direction the piece seems to be calling for. I am strong in composition. I like a piece that moves a viewer through it and evokes emotion. Sometimes those emotions are light, sometimes dark.

I was not a child who drew growing up as I had to help take care of my siblings and didn’t have time for drawing. I also didn’t believe I could do it. I studied art in college and received a BA in Art. It still took many years for me to begin developing my skills as I now had my own children to care for. In the past decade I have picked it up again and am gaining more skill and confidence.

Imagine walking into a room, or through life, and knowing you can’t touch anything, but this is how some people understand the world, how they see their surroundings, due to no fault of your own. The world can be limiting to people who lack one of their senses; the blind to be specific. I find art is not very inclusive for the blind, so I aim to make art available to bigger part of society. Making artworks that are meant to be touched or handled, which they can feel, is important in creating an all-embracing experience for more people.

This stems from having a blind family member. It initially started with my husband’s aunt, who is blind and she likes to examine all my ceramics. Even though she is blind I find that she is one of the few people that genuinely sees my work. She comments on the uneven thickness of the walls, the smoothness of the glaze, or the texture of the surface. Listening to her describe my work as she handled it, made me think about, how most art isn’t to be touched. Most work is just put out for display. I questioned why art wasn’t more inclusive? At that exact moment I had the idea to make art more inclusive.

My intention is to make tactile sculptures while focusing on surface decoration, texture, form and symbolism. I’ll be focusing on the hybridity of my heritage and nature in the form of decay. The cycle of the Monarch butterfly is directly tied to my Mexican roots. In the winter the Monarchs migrate to warmer regions and end up in Michoacán, México, where my parents migrated from. The Monarch butterfly’s arrival coincides with the festival, Dia de Los Muertos or Day of the Dead. There is also the ancestral significance that the Aztecs believed that the last breath of a dying person became a butterfly (in Aztec papalotl). As the life cycle of the butterfly (egg, larva, pupa, and butterfly) can clearly be observed, the Aztecs therefore gave this insect symbolic meaning of transformation. They believed the souls of the warriors killed on battlefield were like butterflies fluttering among flowers. The insect’s fluttering wings were linked to fire and the sun, like the flickering of a flame. For thousands of years Mexicans have believed this. Decay is a natural part of life we choose to ignore, due to the inevitable end that will eventually swallow each and every one of us. The constant state of decay and transformation is an intriguing element that I can draw inspiration from. Things that once lived now lay dying on the forest floor being broken down with the leaves that fall to the ground every autumn. The fallen rotted trees get broken down by, seen and unseen forces, while being reabsorbed back into Earth.

"Empty windows in unoccupied storefronts send a message that isn't very positive," said Yakima Cheryl Hahn who originally championed the "Windows Alive!" project. "The idea behind 'Windows Alive!' is to fill those storefront windows with beautiful art and create a more engaging and vibrant environment downtown. The project also gives local artists a wonderful opportunity to showcase their work."

The Arts Commission is accepting applications through December 31st, 2020 for the spring installation.